Here you can read facts from Kyrgyz history, but during tours you will hear more from our guide. In addition, it will be more pleasant for you to travel by car using car rent service. Kyrgyzstan, like all the states of Central Asia, is one of the oldest centers of the origin of human civilization. The oldest traces of human habitation in this area were found in the Central Tien Shan and the Ferghana valley, the age of the artifacts indicates that they all belong to the Paleolithic era.

Issyk-Kul, Kyrgyzstan today, Kyrgyzstan 2011, Kyrgyzstan Bishkek, Uzbekistan Kyrgyzstan Neolithic sites have been found in the vicinity of Bishkek and Naryn. Later archaeological finds - rock carvings discovered in the area of the Sary-jazz river, allow us to assert that the tribes who lived here at the turn of the IV-III centuries BC were already familiar with stone tools, made pottery, and were able to handle a bow and arrow. The origin of cattle breeding and agriculture also dates back to this time. Already later, in the bronze age, numerous tribes lived on the territory of Kyrgyzstan, engaged in cattle breeding and agriculture. Gradually, the economic structure within the tribes changed, and the structure of the population changed. Nomads United in tribal unions, communities of farmers began to use slave labor. The first of the now - known tribal associations, the Saks, was formed in the North of present-day Kyrgyzstan and existed from the VII to the III century BC. Later, part of the Massaget and Saka tribes, on a subordinate basis, United with the Usun tribe and existed so until the V century ad. at the same time, the southern regions of present-day Kyrgyzstan became part of the state of parkan, and later came under the rule of the Kushan Kingdom.

The beginning of the VIII century ad was marked by the seizure of power in almost all territories by the Confederation of Turkic tribes, which in the middle ages passed into the hands of the Karluk tribal Union. This period is characterized by an increase in the number of cities and various settlements in the areas of the Chu and Talas rivers. Trade began to develop briskly, and trade interests were no longer extended to nomadic tribes, but to caravans traveling from Eastern Europe along the Great Silk Road. It was during this period that the first Kyrgyz tribes appeared in the local territories. It is one more important part of tours in Central Asia, feel the vibe of ancient and modern East.

The first written mention of the Kyrgyz as a nation dates back to 569. As it is known from the message, this year the Ambassador of Byzantium received a Kyrgyz slave as a gift. In the VIII - IX centuries, the Kyrgyz are present in the Chronicles as allies of the Turkic tribes, in their failed campaigns against the Uyghurs. In the XIII century, the peoples of Kyrgyzstan were conquered by the Mongols and only at the end of the XIV century regained their independence. Since the XVI century, the Kyrgyz have been constantly dependent on certain neighboring peoples. By the middle of the XVIII century, the Kyrgyz tribes formed tribal relations, which then persisted until the end of the XX century. At the head of each clan stood the leader - aksakal, the elders of the clans were United in a tribal Council.

At the beginning of the XIX century, the Kokand khanate seized power over the Kyrgyz tribes, but the freedom-loving people tried to free themselves from the Khan's yoke. Popular uprisings broke out in various parts of the country. So in 1842-1843, popular riots swept the Issyk-Kul region, in 1845 an uprising occurred in Osh, 1857-1858 were marked by uprisings of the Chui and Talas Kyrgyz, but the largest unrest occurred in 1873-1876.

In the fifties of the XIX century, a large-scale annexation of local territories to Russia began. The regular Russian army, along with which the settlers from its European part moved, systematically captured the best lands of the country. In 1867, the entire territory of Northern Kyrgyzstan was incorporated into the Russian Semirechensk region, and by 1876, the southern part of the country was transferred to the Syrdarya and Ferghana regions.

After the revolution of 1917, a real political struggle for power unfolded in Kyrgyzstan. United by the common idea of fighting for independence, two political parties opposed the Soviets. However, the Bolshevik government, with the support of the population of mining settlements, suppressed dissent and achieved the entry of Kyrgyzstan into the Turkestan ASSR. The liberation movement of basmachestvo did not bring positive results, and by 1920 the popular resistance was finally suppressed.

The years of Soviet Power brought significant changes to the life of the Kyrgyz people. At first it was proclaimed the equality of the sexes, then abolished polygamy and dowry are prohibited. In 1924, the Republic gained autonomy and became known as the Kara-Kirghiz region, in may 1926 it acquired the status of the Kirghiz ASSR, and in 1936 it became the Kyrgyz SSR.

The twenties and thirties of the last century were a milestone in the rise of Kyrgyz industry. Coal industry, metallurgy, mercury and antimony production, food industry and some light industries developed. The collectivization of agriculture, which had been in the hands of nomadic tribes for centuries, began to be carried out.

The persecution began. Wealthy villagers (bais), under the guise of fighting class enemies, were persecuted, imprisoned, killed or deprived of property, condemning them to starvation. During the Stalinist rampage of 1936-1938, the scientific and creative intelligentsia and the religious elite were almost completely exterminated in the country. Arabic books and manuscripts were destroyed. The post-war period of development of the Republic's economy was characterized by a General rise and growth of the welfare of the people. The basis of the economic complex was a diversified industry and strong agriculture, developed science and skilled workers. However, by the 70-80 years of the last century in the economy of the Republic there were serious problems caused by the transition to new market relations, announced by the next policy of the Communist party of the USSR. On this basis, interethnic conflicts began to escalate. Relations with the Uzbek minority, who lived compactly in the Osh region, became much more complicated, and open clashes began to occur. 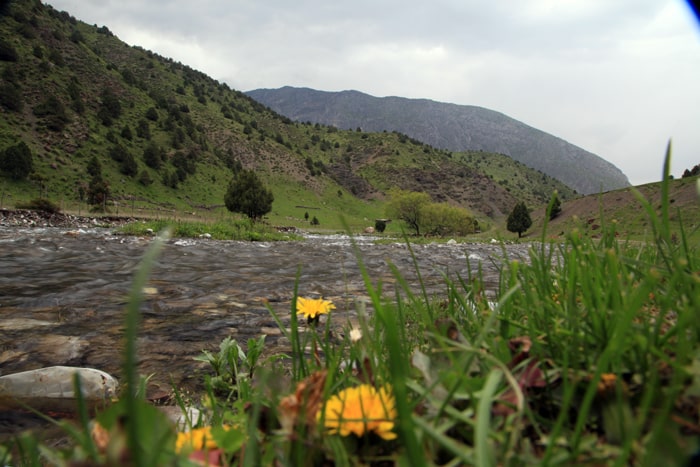 The beginning of the nineties was a difficult period for Kyrgyzstan. In 1989, mass demonstrations of the masses became more frequent, and land grabs began in the vicinity of Frunze. In the winter of the nineties, a number of protest rallies swept across the country. Against the Armenian settlers, and by the summer, protracted, bloody clashes began between Uzbeks and Kyrgyz in the Osh region. The unfolding power struggle between the head of the government and the first Secretary of the Communist party of Kyrgyzstan did not allow the election of the President of the Republic. Therefore, A. Akayev, who spoke at the party Congress with a proposal of measures to resolve the situation, immediately began to be perceived by the majority as a necessary political figure. In 1990, it was Akayev who was at the head of the movement for market reforms in the renewed USSR, so it is quite logical that in 1991 Mikhail Gorbachev offered him the post of Vice-President of the Soviet Union, but was refused. Through the efforts of Kyrgyz deputies, A. Akayev was summoned from Moscow and given the powers of the first President of the Republic. Together with the already elected president of Uzbekistan Karimov, they were able to extinguish the inter-ethnic conflict in Osh. In August of the same year, the President refused to comply with the orders of the GKCHP and by September 1, the Republic declared its independence. A. Akayev was elected and re-elected as President of Kyrgyzstan 3 times. His intention was to make the Republic a "second Switzerland" by building a "European-style democracy". Therefore, he allowed the creation and activity of opposition parties and movements, and tried to prevent the outflow of the Russian-speaking population. With his "blessing", the Slavic University was opened, the Assembly of peoples of Kyrgyzstan was created, which fought for the unity of interests of ethnic entities that inhabited the country, and in 2001, a number of amendments to the Constitution were adopted, which guaranteed the official status of the Russian language in the state. The Akayev administration began to implement social and economic reforms very decisively: they introduced a national currency, declared private ownership of land, carried out privatization, and restrained the growth of inflation in the country for a very long time. Kyrgyzstan became the first country in the CIS to join the WTO. The foreign policy activity of the first President was aimed at establishing equal partnership relations between regions and States. They were asked to restore the great silk Road, Akayev supported the idea of making the Central Asian zone free of nuclear weapons. While fully maintaining friendly relations with Russia, he also allowed the United States to deploy military bases on the territory of the country as part of the "fight against terrorism".

However, over the years, Akayev's rule became increasingly criticized for growing authoritarian tendencies, and he was openly accused of corruption. The last straw was the arrest of one of the opposition members and the shooting of a protest demonstration in his defense. The 2005 elections, which were again won by Akayev and his supporters, were found to be rigged, and a wave of uprisings swept the country. On March 24, 2005, the rebels seized Bishkek and the presidential Palace. Akayev and his family were forced to flee to Russia, where he signed a letter of resignation from the post of President.

After first president there was one more revolution in 2010. Today you can travel without worries. And keep in mind that you will provide for yourself comfort with the car rent service during tours.