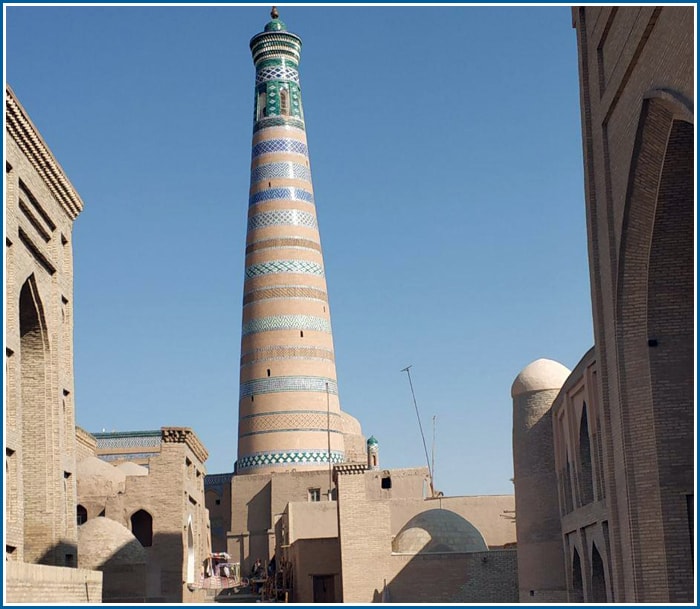 Day 1: Tashkent - Chimgan Mountains - Tashkent
After arrival at the airport you will be met by our guide. This tour will be one of the best travelling experiences. The first part of the day will be dedicated to Chimgan Mountains and the beautiful Charvak Lake. The Chimgan mountains and Charvak lake belong to the Ugam Chatkal National Park. One of the largest National Parks in Uzbekistan. The rest of the day you will get acquainted with the sights of Tashkent including Independence square, and Amir Timur square. Amir Timur square, one of the central squares of Tashkent, named in honor of national hero - Amir Timur. Thehere is a walking street between two squares called the local Broadway, so-called show room for local artists and cozy place for tasting local cuisine. Night is in a hotel.

Day 2: Tashkent - Samarkand
After breakfast you will be transferred to railway station to get on your train to travel to Samarkand. Samarkand is situated in the valley of the river Zerafshan. It is the second largest city of Uzbekistan. Today you will visit its most outstanding sights such as Registan square, Shakhi-Zindeh, Mausoleum Guri Emir and Bibi Khanum Mosque. Registan Square, a complex of three fascinating Madrasahs dating back to 15-17th centuries, is the main highlight of Samarkand. Architectural complex of Shakhi-Zindeh represents a big collection of mausoleums dating back to 11th-15 centuries being a part of a UNESCO World Heritage Site. Bibi Khanum Mosque was built in honor of Tamerlane's favorite wife. Overnight is at the hotel.

Day 3: Samarkand - Bukhara
You will have a morning train to travel to Bukhara, one of the beautiful cities in Uzbekistan. Today will be devoted to Bukhara city tour. The name of Bukhara originates from the word "vihara" which means "monastery" in Sanskrit. With more than 140 architectural monuments it is a town museum dating back Middle Ages. The tour includes visiting Ark Citadel , Samanids mausoleum, a real masterpiece of architecture of 9th -10th century, the Chashma Ayub, and Bolo-Hauz mosque, also known as the mosque of forty columns. Then you will walk along the shopping domes and visit famous Nodir Divan Begi madrasah, a part of Lyabi House Ensemble, famous central sightseeing of Bukhara. The tour will end with Poi Kalon complex. Night is in a hotel.

Day 4: Bukhara
Today you will have a sightseeing tour around the Bukhara. You will visit Bahauddin Naqshbandi complex, located few kilometers from Bukhara. It is a memorial complex of famous Sufi Leader and Philosopher. He was counsellor of Amir Timur.  The complex consists of Kushbegi and Muzafarohana mosques, courtyard, madrasah, and burial vault of Bukhara rulers and tomb of Saint Bakhauddin Nakshbandi. Then you will drive past to Sitorai Mohi Hosa complex. The palace was built using various architectural styles. Next you will drive to Sumiton village to visit the town of the dead - Chor Bakr memorial complex. Construction of the complex began during the Samanids reign until the 16th century. After excursions you will drive back to city. Night is in a hotel.

Day 5: Bukhara - Khiva
Today we will start our drive to Khiva, the most ancient city in Uzbekistan.  Its history is strongly connected with the legendary Khorezmshah's State. In the 10th century Khiva is mentioned as a major trading center on the Silk Road. All the caravans had a stop here on their way to China and back.  The historic heart of Khiva have been so well preserved that it's sometimes reffered as a ‘museum city'. On the way from Bukhara to Khiva we will enjoy the view to Amu Darya, the deepest river in Central Asia. Night is in a hotel.

Day 6: Khiva
Today you will have a wonderful sightseeing tour in the oldest city of Uzbekistan. In Khiva there is another inner city - Ichan-Qala. Ancient buildings, palaces, mosques, Madrasahs, Mausoleums, Minarets, Caravan-Sarais and Bathhouses transformed Ichan-Qala into unique historical monument. It consists of over 400 traditional dwelling houses and about 60 architectural monuments all surrounded by thik walls. In 1969 Ichan-Qala was proclaimed a historical and architectural conservation area. Overnight in a hotel.

Day 7: Khiva - Tashkent
In the morning is flight to Tashkent. After arrival the full day is dedicated to a sightseeing tour in Tashkent which includes visiting Courage Monument, a memorial complex, erected in honor of the elimination of the consequences of the Tashkent earthquake, Zangi Ota memorial complex, State Museum of Timurids'. The city tour will be completed by visiting the State Museum of Applied Arts of Uzbekistan, consisting of fine examples of glasses and national clothing, hand and machine embroidery, skullcaps and national fabrics, carpets and woodcarving. Night is in a hotel.

Day 8: Flight
Transfer to the airport. End of travel.