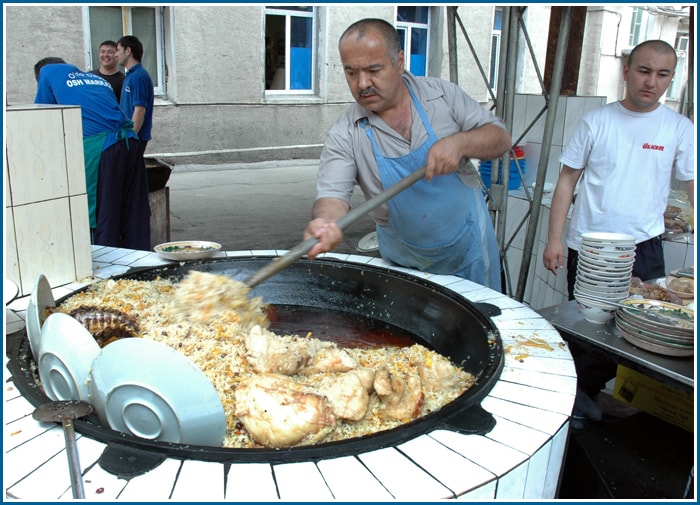 Day 1: Tashkent- Nukus
The flight to Nukus you will have in the morning. To be well- oriented in the city you will have a full-day city tour marveling among remarkable places in Nukus. At the beginning of the trip you will explore the Museum of Savitsky one of beautiful places in Uzbekistan. . The museum has begun the existence in 1966. But the founder Igor Vitalevich Savitsky, who came to Karakalpakstan started to collect the arts in 1950-1960. Thanking his persistence and enthusiasm have been found and rescued set of works. The museum collection totals nearby 90000 works,  which exhibits the masterpieces of folk art of Uzbekistan and Russian -avant-guarde. There are works of Sokolov, Komarovskiy and Amaravella group that keeps this museum. It is a treasury providing guidance on a cultural piece. In course of the tour we will head on outside of Nukus to discover Mizdakhan necropolis. This place is a sacred territory of Moslems today. People compose a lot of history and legends about this place. The necropolis has improbable territory, but also combines great variety of buildings. On the territory of this place is situated one of the ancient Asian cemeteries. Historians believe, that exactly in this place has arisen Zoroastrianism. In the 40s there were archeological ezcavations, where were found: ossuaries, valuable coins and ceramics. Overnight is at the hotel.

Day 2: Nukus - Ayaz Qala - Tuprak Qala - Khiva (290 km, 6 hours)
Today we will drive to Khiva, the most ancient city in Uzbekistan full of history and fascinating sites. Khiva a unique city claiming for a rank "the Seven Miracle of the world", people consider as from Khiva  has begun the epoch of creation of the world.  About an origin Khiva compose many different legends.  City is similar to an open-air museum, and a center is the fortress Ichan-Qala. In the 10th century this city was one of the most important points in the history of the Great Silk Way. From dawn to dusk, until the fence were opened, an infinite stream of moving string of camels with baggage passed them. Many of sightseeing of Khiva are situated in the inner city Ichan-Qala. Old part of a city enclosed with a strengthening and transformed into a historical museum reserve. Now we have unique monument that we will carefully pass to the future generation. En route you will explore two famous fortresses: Ayaz Qala and Turpak Qala. Ayaz Qala is an ancient castle of Khorezm, named on behalf of legendary warrior-slave Ayaz, a Turkic folklore hero. Ayaz Qala built in the 4-th century BC, and dominate the surroundings the steppes, served as a military. Tuprak Qala, means ‘clay fort', was the royal city of Khorezmian ruler Artav. The complex is interesting that is unlike other fortresses here there are not strengthened rural settlements. Infinite wars have destroyed many constructions and remained it without any sign of life. Khiva is very beautiful on a  sunset and at night, the place turns to a fairy tale in Ichan-Qala.  You will spend night in a hotel in Khiva.

Day 3: Khiva - Urgench - Tashkent
Today there is the option to take an excursion in the oldest city of Uzbekistan. The sightseeing tour supposed to be inside of Ichan-Qala, the inner city in Khiva (protected by brick walls some 10m high). Many of monuments of Khiva are concentrated in the inner city Ichan-Qala, a fortress oriented in the four cardinal directions for comfort of caravans. There are situated buildings, palaces, mosques, Madrasahs, Mausoleums, Minarets, Caravan-Sarais and Bathhouses. 400 traditional dwelling houses and about 60 architectural monuments are situated in Ichan-Qala . In 1969 Ichan-Qala was designated a historical and architectural conservation area. The most remarkable sites in it are the Kunya-Ark the ancient fortress established in 1686-1688 by Arang-Khan. Kalta Minor minaret and Tash Khouvli palace built in 1830-1838 for Alla-Kulli -Khan an incredible sample of Khorezm architectural pearls of 1830s. Evening flight to Tashkent. Overnight is in a hotel.