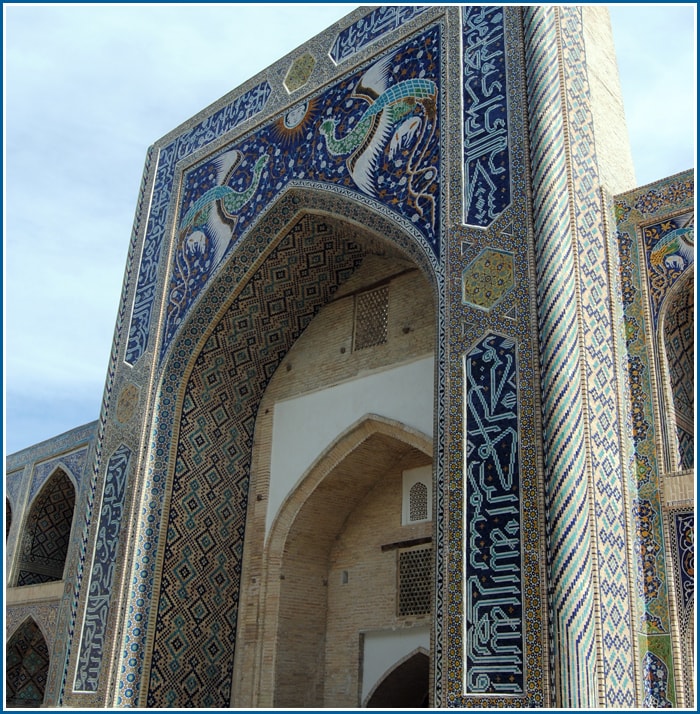 Day 1: Tashkent - Chimgan Mountains - Tashkent
After arrival our guide will meet you at the airport and you can begin your travelling. The first part of the tour you will explore Chimgan Mountains and the beautiful Charvak Lake, one of the most beautiful nature reserves in Uzbekistan. The rest of the day you will get acquainted with the sights of Tashkent. You will visit Independence square, walk through the local Broadway, a walking street between independence square and Amir Timur square. Amir Timur square, one of the central squares of Tashkent, named after national hero - Amir Timur. With almost two million people, Tashkent is the biggest city in Central Asia. Night is in a hotel.

Day 2: Tashkent - Samarkand
After breakfast you will be transferred to railway station of Tashkent and go by train to travel to Samarkand. Samarkand is the second largest city of Uzbekistan. It is as ancient as Babylon or Rome. Today you will have a sightseeing tour there and visit Registan square, Shakhi-Zindeh, Mausoleum Guri Emir and Bibi Khanum Mosque.  The city has carefully preserved the traditions of ancient crafts: embroidery, gold embroidery, silk weaving, engraving on copper, ceramics, carving and painting on wood. In 2001, UNESCO added the city to its World Heritage List as Samarkand - Crossroads of Cultures. Overnight is at the hotel.

Day 3: Samarkand - Bukhara
You will have a morning train to Bukhara, beautiful cities of Uzbekistan. This day of your travelling will be devoted to a city tour. The name of Bukhara originates from the word "vihara" which means "monastery" in Sanskrit. With more than 140 architectural monuments it is a town museum dating back Middle Ages. The tour includes visiting Ark Citadel, Samanids mausoleum, a real masterpiece of architecture of 9th -10th century, the Chashma Ayub, and Bolo-Hauz mosque, also known as the mosque of forty columns. Then you will walk along the shopping domes and visit famous Nodir Divan Begi madrasah, a part of Lyabi House Ensemble, famous central sightseeing of Bukhara. The tour will end with Poi Kalon complex. Night is in a hotel.

Day 4: Bukhara - Tashkent
Today you will continue the sightseeing tour in the surrounding of Bukhara. First you will visit a memorial complex of famous Sufi Leader and Philosopher, Bahauddin Naqshbandi. It is one of the pilgrimage places of Islamic world. Sheikh Bakhauddin Nakshbandi was counsellor of Amir Timur.  The complex consists of mosques of Kushbegi and Muzafarohana, madrasah, and burial vault of Bukhara rulers and Dakhma and the tomb ofPhilosopher himself. Then you will drive to see the Sitorai Mohi Hosa complex. The palace was named after one of Emirs young wife after her death. After excursion you will transferred to Bukhara railway station to depart to Tashkent. Night is in a hotel. End of your travel.

Day 5: Flight
Transfer to the airport.